The musculature of the esophagus consists of an outer longitudinal muscle layer and an inner muscular layer, generally described for convenience as the circular muscular layer.  The anterior wall of the esophagus is firmly applied to the posterior tendinous wall of the trachea in its upper portion, where the two organs are attached to each other by fibro-elastic membranous tissue containing some muscle fibers. 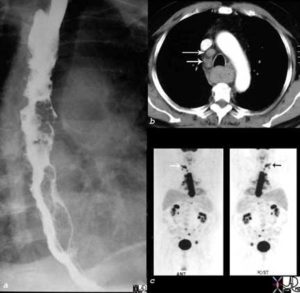